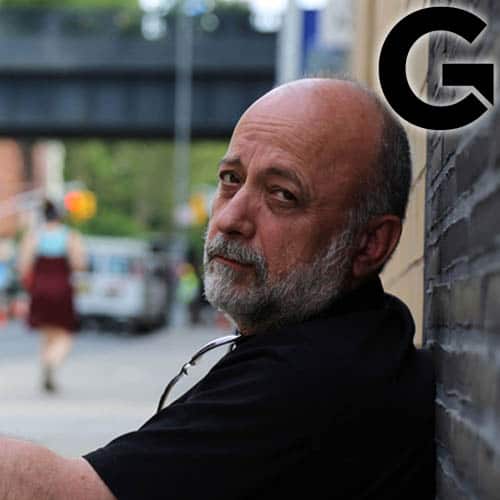 Stanko Pavleski is born in 1959 in Erekovci, Macedonia. He graduated at the Faculty of Fine Arts in 1984 in Skopje. He got his master’s degree at the Faculty of Fine Arts in Belgrade in 1992. Currently, he is a professor at the Faculty of Fine Arts in Skopje.He expresses in the field of sculpting, expounding with minimalism and neo-minimalistic experiences, reducing it to a sign and ambient.After 2002, in his neo/post/conceptual accomplished works, that are based mainly on books and brochures, but also on different actions in nature, installations and performances followed by documented photographs and video recordings, testing the frame of art. He is also an author of several books (narration and body), peculiarly exhibited independently but also as part of a sculptural entirety of the work. His books are: The Unwritten book to the mediator (2002), Book above the book covers: My Anthology – Macedonian art and critique: 1954-2004 (2004); Project Preface – How could I write a critique as good as that by the art critics (2005, with translation into English); I, Ptolemy MKD & N.B. Nothingness (2009, with translation into English) and written art (Tokmu Project, 2011, Short stories).Since the beginning of his career, Pavleski is a part in several important selections of ex-Yugoslavia. He participates at the Sculpture exhibition in Panchevo (1991) where he receives his first award as equal. At the biennial for small sculpture in Murska Sobota (1987) and the Youth Biennial in Rieka (1991) he receives the award for sculpture. He is also a part of the exhibition Yugoslavian Documenta in Sarajevo (1897, 1989) and the Geometrish exhibition (1990 selection) etc. In 1996, in Gornji Milanovac at the fourth International biennial in miniature art, he receives the special award by the jury, he also participates at the International biennial in Murska Sobota (1995) and in Cetinje (1997). He is represented in many exhibits of Macedonian art abroad and in other curators projects. He has been three times awarded at the Youth Biennial in Skopje in 1991, with Grand Prix; and at the exhibits at DLUM with the awards for sculpture “Nereshki Majstori” and “Jordan Grabul”.
He has independent exhibits in Belgrade in 1992, Brussels in 1995, New York in 1997, 2007, 2008, and in 2017, Paris in 2006, Alexandria in 2009 and in Skopje in 1987, 1991, 1993, 1998, 2006,2009 and 2012, as well as other group exhibits both in Macedonia and abroad. Pavleski is one of the founders of the Art activity in nature – “Artistically through the Phenomenal” (AtP, 2004) and until today he is devoted to such idea and practice. Since 2013,Pavleski, Vesna Dunimagloska and Gjorgji Krsteski, through the modified concept of the project, as well as the increased dynamics of the events, transform the “BY THE WAY” into an Association with limited responsibility.